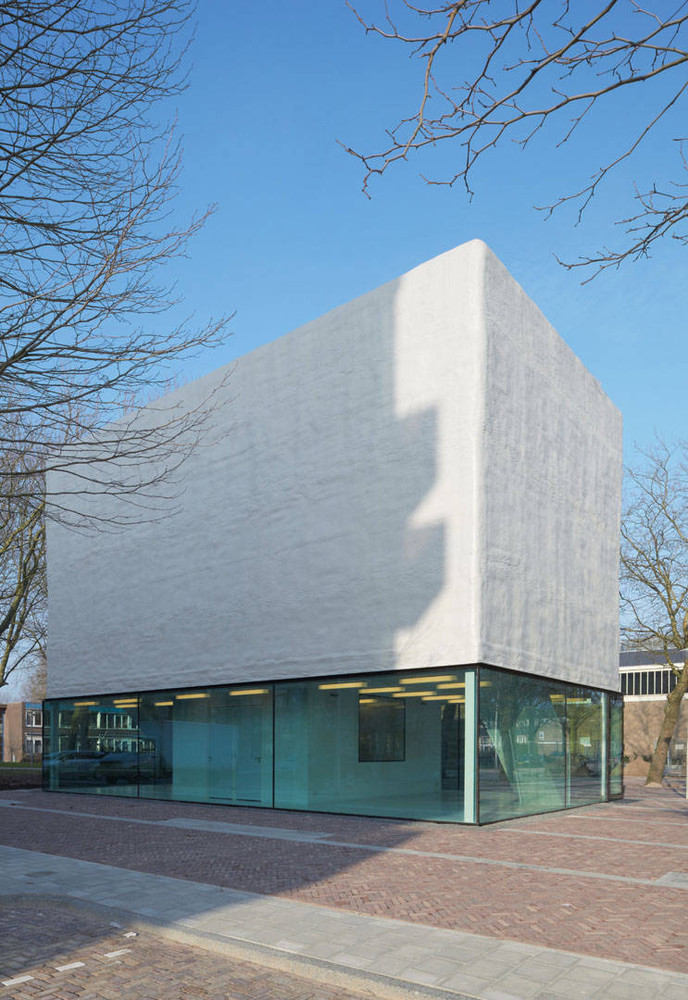 Fringe Group in the Center The Amsterdam-Bijlmermeer housing development, which was erected in the nineteenseventies based on CIAM principles under the direction of Siegfried Nassuth, has been being overhauled since the mid-nineteen-nineties due to a wide range of social and structural problems.

In this case, urban renewal means, above all, radically demolishing large-scale, honeycombed housing blocks and replacing them with differentiated, smallscale block development and terraced housing. At the same time, the existing shopping center tnill being upgraded through the addition of a wide range of new, public facilities and thus assumes supraregional importance.

In the northern part of the downtown area, a new market square is being constructed, surrounded by the district town hall, a swimming pool, the Bijlmer Park Theater, and the already existing police station.

In addition, the established public park is being regenerated and made better connected with the district center via the square.

Inwithin the framework of a negotiation procedure, Atelier Kempe Thill received the commission to plan a residential hotel for heroin addicts located at a sensitive transition between the square and the park. The task here was extremely delicate since such facilities are very unpopular with the population and normally have a miserable existence in container structures on the urban periphery in industrial or railway wastelands, almost never realized as a new building in the direct vicinity of central, public institutions and parks.

For the architects, this posed an interesting question: On the other hand, as a result of its sensitive user group, the building is designed as a rather anonymous, reserved structure that forms a building ensemble with the adjacent police station.

Collective Living Room This residential hotel is defined by a differentiated use of space. With forty-five square meters per person, the living space provided is very generous and far exceeds social housing standards, which is surely remarkable from a social point of view.

The square plot of land that was available initially, measuring twenty-five meters square, turned out to be rather unfavorable for the organization of the spatial program since the many usually small rooms all require direct daylight.

The building is therefore organized along the property boundaries, which results in a programmatic ring in terms of layout. On the ground floor, there is a large, central common room that opens up over three stories and is realized within the structure as a cube measuring nine meters on each side. The impact of the space is further enhanced by the lowering of the floor level in the atrium area, whereby its communal use is also emphasized optically.

Above the atrium is a roof terrace, which is designed as an thhill and introverted courtyard. In it, the residents can withdraw and relax away from the public space. Light and Neutrality of Use The building is owned by a building society and has been rented by a foundation for a period of ten years.

In order to make it possible for the owner atelifr make simple adaptations within the structure, Atelier Kempe Thill was, for the first time, faced with the challenge of creating a structure that is truly neutral in function. 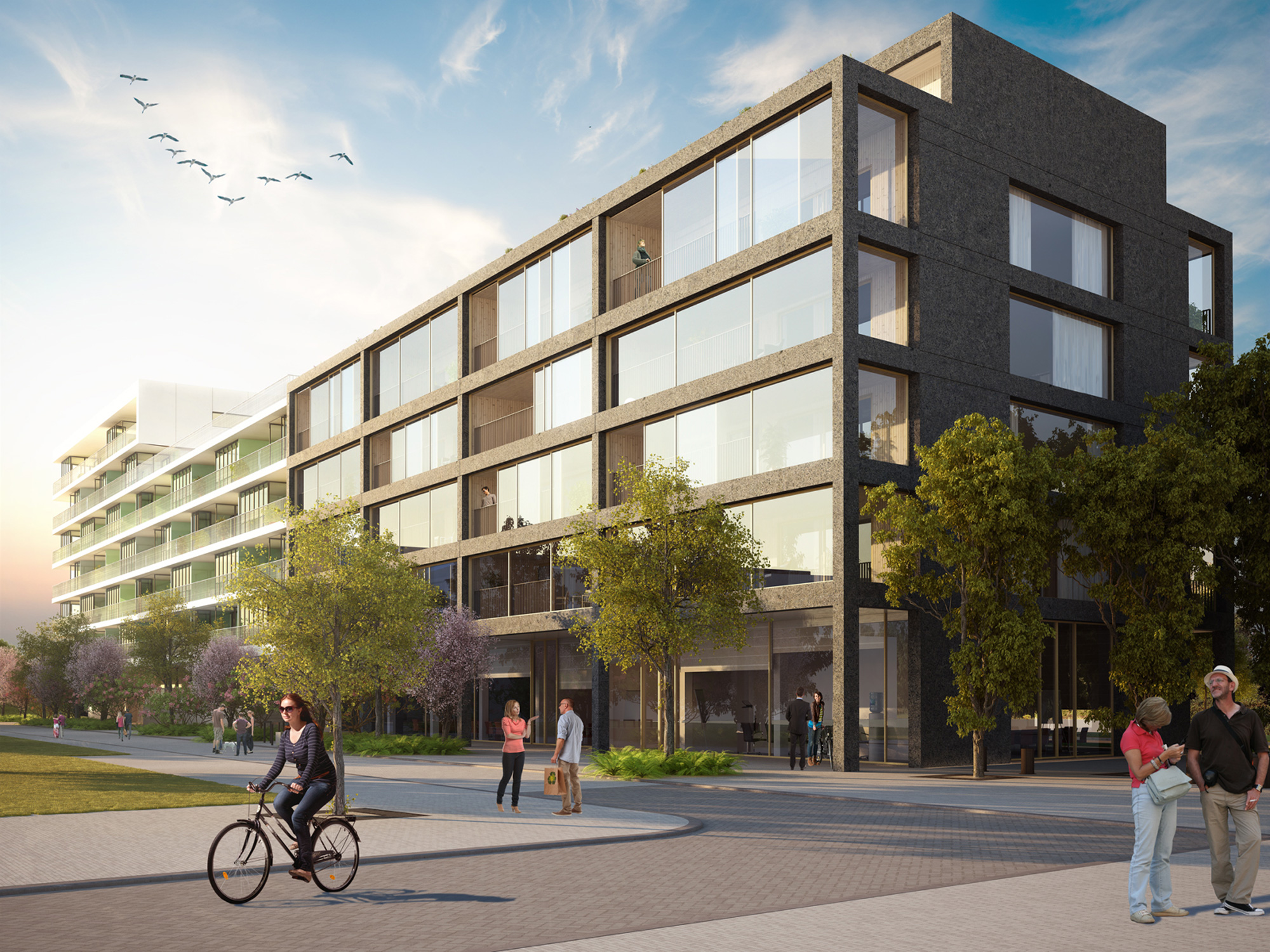 The building is executed as a frame construction, with non-load-bearing interior walls and all the technical installations also integrated into the building independently of the load-bearing structure. As a result of these measures, the structure can be adapted to new uses relatively quickly and without great expense.

Due to its compactness and its use, it is important that a considerable amount of natural daylight is available within the building. Space-dividing walls are often executed in glass, which gives rise to expansive visual connections within the building that are necessary for facilitating an overview and for social interaction.

Between Representation and Anonymity At first glance, the exterior of the building is defined by horizontal, rather neutral bands of windows with solar-control glazing. Since windows that can be opened are expressly tholl desired according to safety regulations, very generous fixed glazing with lengths of 2. The glass is clamped in very slim, extruded, and black-anodized aluminum profiles, which were developed specifically for this project in close cooperation with the Keers firm.

In order to make this possible financially, the number of the different types of profiles was reduced to three. Three horizontal balustrades run between the windows. The green of the glass tiles thus strives for a color reference to the glazing and to the colors of the neighboring police station.

For cost reasons, the tiles were not purchased in Italy but instead specially produced for this project in China. In the interior of the building, the task consisted of achieving a robust and neutral thilo of materials thil, the tight budget framework.

A decision was consciously made to use light gray, easy-to-clean surfaces in combination with a lot of glass in order kempr offer a calm framework for everyday life. All the walls are plastered, with the concrete surfaces in the stairway given only a transparent coating, the floors coated with polyurethane, and the ceiling executed with acoustic spray plaster.

All technical installations, such as ventilation outlets, extractors, safety technology, fire dampers, and so forth, are integrated as carefully as possible into the walls and ceilings so that a monolithic character is created for the surfaces here as well.

The atmosphere that thus develops is very calm and neutral, emphasizing the spaciousness of the building and offering users the opportunity to adapt the individual rooms to their own particular needs.

With this undertaking, it was possible to realize a special housing construction project with a consciously public-oriented and especially refined aura, both inside and outside.